In the past the art world considered the use of colour often as "not artistic" (black and white was the norm) but that changed in the 1970's thanks to art photographer William Eggleston and his 'New Color Photography'. Karl lets his colours often hover between photorealistic and surrealistic. It is noteworthy that, although Karl uses digital postproduction like other professional photographers, he keeps this to a minimum. As he himself explains; "I don't use, for instance, high pass filtering because it would give the skin of the models an unnatural look. Instead I would sometimes use a light gaussian blur to make the character in the shot less razor-sharp as if slightly out of focus like it would look in a painting." Karl wants people to look like people, not like dolls (although he does appreciate fine make-up). This gives his work a documentary style although each art photograph is, in fact, staged and directed thus creating a fusion between Hyper Realism and what famous Dutch painter Carel Willink described as Imaginary Realism (from imagination concieved reality). It will be clear to most observers that Karl has a strong tendency towards Romanticism.

The way in which Karl frequently uses light and shadows compares to the style of the old master painters and thus his art often walks a thin line between a classical painting and a modern photograph.

Many of Karl's work, such as Cupid Rising, Achilles, Temptation (Eve and the apple), can be labelled "Portrait Historié", the depiction of people as biblical, mythological, or historical personages, which originated in the Netherlands in the later 16th century.

Dutch art curator Marcel Salome of Salome Artventure says about Karl: "As curator of Dreamscapes I'm always searching for new art and I happened upon the art photography of Karl Hammer. His artworks intrigue because of the atmosphere that he realizes in his work but also through their narrative qualities. The often beautiful male and female models distract you from hidden messages in the work that the viewer often doesn't capture on first viewing."

Indeed, looking at Karl's art is not always the same as seeing Karl's art. Each work can be viewed in different ways while discovering new details. Karl conveys stories and even subplots through the use of color, symbols, or just the pose of a model (like expressing shame and humiliation in the artwork "Ginger"). He addresses social issues such as miscarriages of justice in his critically acclaimed art work "Amnesty International". At other times his themed art work seems just a portrait yet on closer inspection shows, for instance, existial loneliness as  seen in the artwork "Liebestod". It is therefore important to find the extra layers, which Karl puts in his work.

When Karl can't find the perfect set to make the art work that he wants, he simply creates it. He then scouts locations and combines this with specific props, sometimes shot in macro, and models using photo editing tools. Not that this makes his life much easier because there is still a lot of work to be done. In all of these cases the lighting and perspective (angle) has to be just right, not only for the set on location, but also on every prop and model, which has to match each other. And when that is finally done the hard work on photo editing starts, combining all the different elements. See also this video. 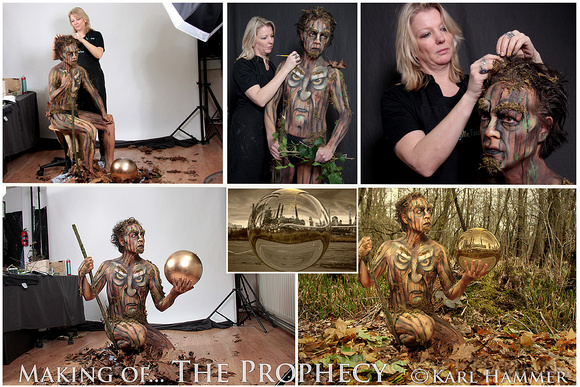 Karl invites his fans on a wonderful trip through his art and wants his fans to have an open mind and not be told how to interpret an art work. Maybe it is best described in the words of David Bowie and Toni Visconti:

"Any great artist wants you to stand back and look at the work to analyse it and feel things from it (...) The idea of art is to stimulate your own imagination." (David Bowie, the last five years)